Symposium: Hard Choices for the Democracy Movement in Myanmar and for the Myanmar Diaspora

Symposium: Hard Choices for the Democracy Movement in Myanmar and for the Myanmar Diaspora

We are excited to announce that on Friday, January 21st, from 10:00 to 18:30, there will be a symposium on “Hard Choices for the Democracy Movement in Myanmar and for the Myanmar Diaspora.” This symposium is organized by Dr. Alexander Horstmann (Visiting Professor, SDAC, FAU), and co-hosted by Prof. Marco Bünte (Political Science, FAU) and Prof. Dr. Dominik Müller (SDAC, FAU). 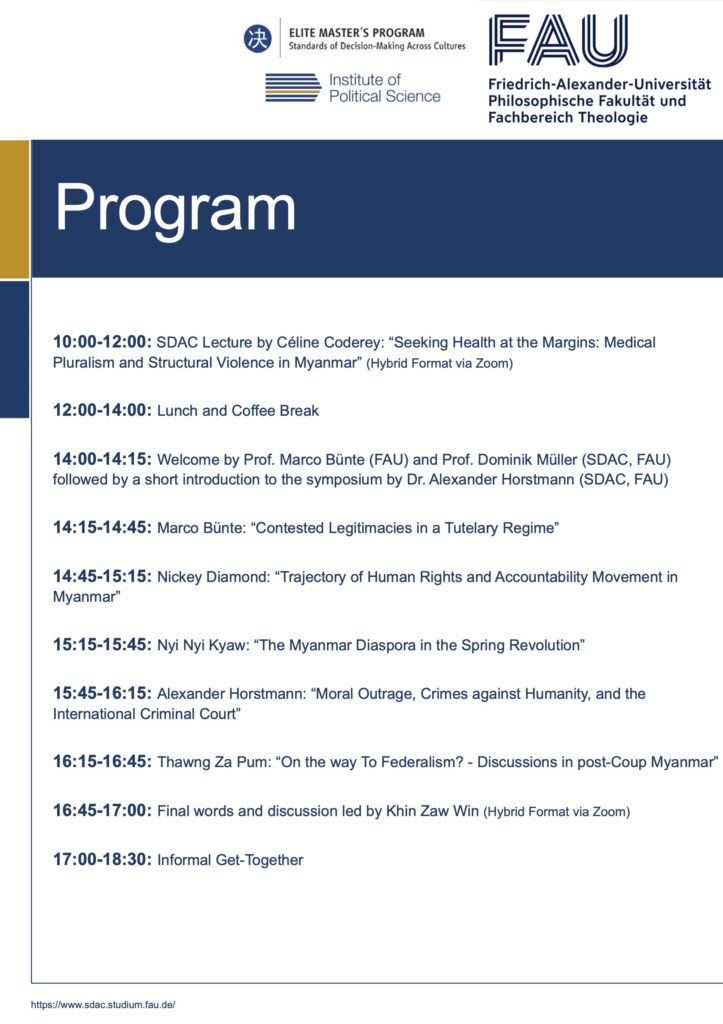 12 months after the coup, the conflict between the ruling military junta and the people has escalated from peaceful demonstrations and civil disobedience movement into a full-scale people ́s war. The radical transformation of generation Z and its organization into people ́s defense forces followed the brutal suppression of peaceful resistance. Many people, who feared immediate arrests, escaped to the ethnic minority areas or, if they had resources and means, abroad to Thailand, India and further away, connecting with the existing Myanmar Diaspora in the West. The junta has outlawed the reigning National League of Democracy with democratic Icon Aung San Suu Kyi. Suu Kyi has been sentenced in a politically motivated trial to 2-years imprisonment to remove her from the political landscape. The democratic government in exile National Unity Government (NUG) represents the diversity of Myanmar and includes ethnic Burmese as well as high-profile members of the ethnic minorities. The Burmese Diaspora together with Western NGOs attempt to support the democracy movement and to transfer humanitarian aid to the people most affected by the day-to-day violence. Moreover, the ICJ has ordered the junta to take provisional measures to prevent further violence against the Rohingya minority in Western Myanmar.

The seminar will examine the political developments one year after the coup, including the Myanmar Democracy Movement and the Myanmar Diaspora. Questions that are tackled include: What are the strategies pursued and the resources available for actors involved? How do they gain political legitimacy? How does the military react to massive civil protest? How is the NUG organized and what kind of strategies are developed to increase visibility and to put pressure on the Military Junta? How does the NUG mobilize support and legitimation for its aims to support a revolution in Myanmar and how does it receive support and legitimation by the Myanmar Diaspora? What is the state of the ICC court investigation of genocidal intent? These and other questions will be discussed in a friendly conversation.

If you would like to attend this event, please register at henriette.hearn@fau.de to receive the details/ZOOM-Link by 19.01.22. There is a limited capacity for in-person participants.